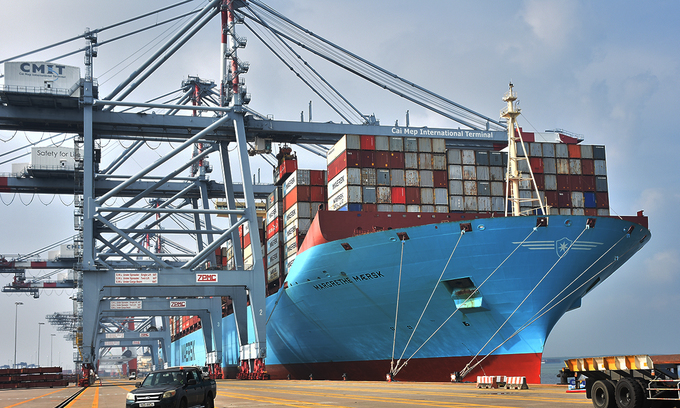 A container ship with a tonnage of over 214,000 docks at Cai Mep International Terminal in the southern province of Ba Ria Vung Tau in October 2020. Photo by VnExpress/Truong Ha.

Market recovery and larger freights helped Vietnamese seaport and maritime transport enterprises, both state-owned and private, gain bigger profits in the first half of this year.

Gemadept Corporation’s management board estimated its first-half revenues at over VND1.4 trillion, up 19 percent, and pre-tax profits of some VND390 billion, up 38 percent. The firm owns four ports in the northern region, one port in the central area and three ports in the south. It plans to increase its share in the Vietnamese port market from 11 percent in 2020 to 19 percent in 2021, and 23 percent in 2025.

Like seaport operators, maritime transport service providers turned profits in the first half of this year, mainly thanks to market recovery and larger freights.

Meanwhile, Hai An Transport and Stevedoring JSC, has been estimated to see pre-tax profits in the first half of this year more than double.

According to VIMC, the quick recovery of Chinese, U.S. and European economies amid Covid-19 outbreaks led to bigger demand for goods and materials, positively affecting the international sea transport market.

Data from the General Statistics Office showed Vietnam’s import-export turnover stood at nearly $320 billion in the first half of this year, increasing over 32 percent against the same period last year. The volume of goods through seaports surged, with container outputs rising 24 percent.

According to the Vietnam Association of Seafood Exporters and Processors, at some ports, freight in mid-2021 doubled that of late 2020 and rose nearly six times against early 2020.