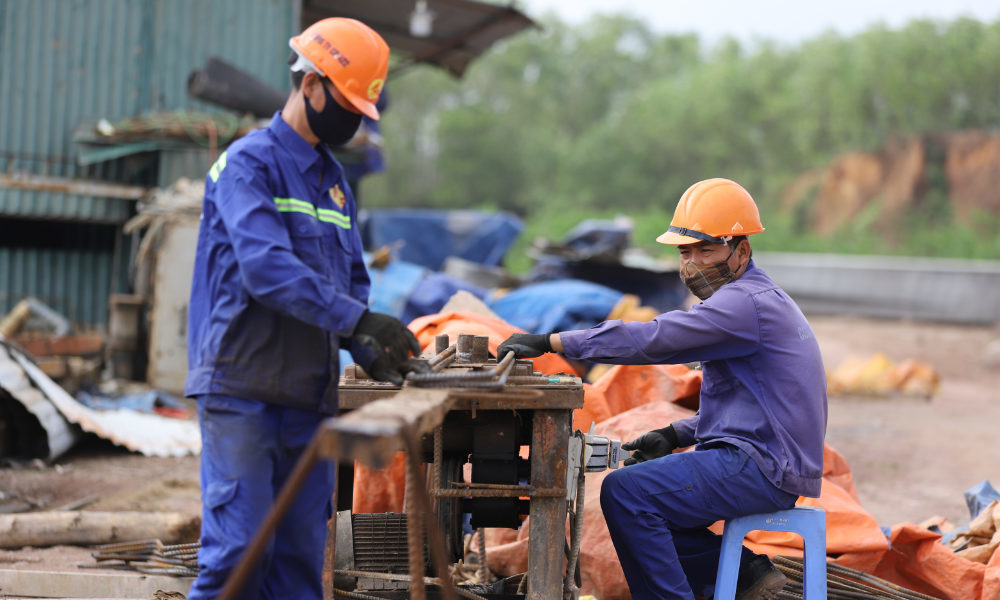 Workers seen on a construction site of an expressway in central Thua Thien Hue Province in March 2021. Photo by VnExpress/Vo Thanh.

Experts are confounded, but officials are not very surprised that Vietnam managed to record a high GDP growth in the first six months.

The say the two main factors in this growth surge are: the low base level last year and an impressive recovery in manufacturing.

The first half growth rate was 5.64 percent, three times that of the same period last year, even though the country had to go through two major Covid-19 waves.

Experts said the growth was surprising because the two localities with the highest infections were major industrial hubs: the northern province of Bac Giang and Ho Chi Minh City. Both localities had to shut down many factories to contain the spread of the novel coronavirus.

Also, businesses were suffering with the number of firms withdrawing from the market rising nearly 25 percent to over 70,000.

But authorities said there was nothing unusual about the growth rate.

Le Trung Hieu, head of the National Account System under the General Statistics Office (GSO), said that the rate was high because last year’s level, when Covid-19 first hit Vietnam, was very low.

Another reason for the high rate is the recovery of the manufacturing and processing sector, Hieu said.

Pham Dinh Thuy, head of industrial statistics division under the GSO, said that industrial growth in the first six month grew 9.3 percent year-on-year, only 0.1 percentage point lower than the first half of 2019, when there was no Covid-19 impact.

Even Bac Giang, the worst-hit Covid-19 locality, recorded a growth rate of 9 percent, even though without the pandemic, the figure could have been as high as 30-40 percent.

Without the fourth Covid-19 wave industrial growth could even have reached 11-12 percent, Hieu said.

Some experts said that the growth rate was also supported by growth in exports, services, retail and agriculture.

However, the rate was still lower than a prior forecast of 5.8 percent by the Ministry of Planning and Investment, while economists surveyed by Bloomberg had expected a growth of 7.2 percent in the second quarter alone.

“This is a challenging target and it depends on how the Covid-19 pandemic progresses, but Vietnam can make it happen.”

However there were other factors of concern, experts said.

Binh said that the rising prices of materials, if not managed well, could bring inflationary risks this year and the next.

Other concerns are that Vietnam has recorded a trade deficit for two months this year and another one could be coming, and that the unemployment rate has been rising.

The country should focus on keeping its macro economy stable and on achieving sustainable growth instead of pursuing GDP targets at all costs, Binh said.