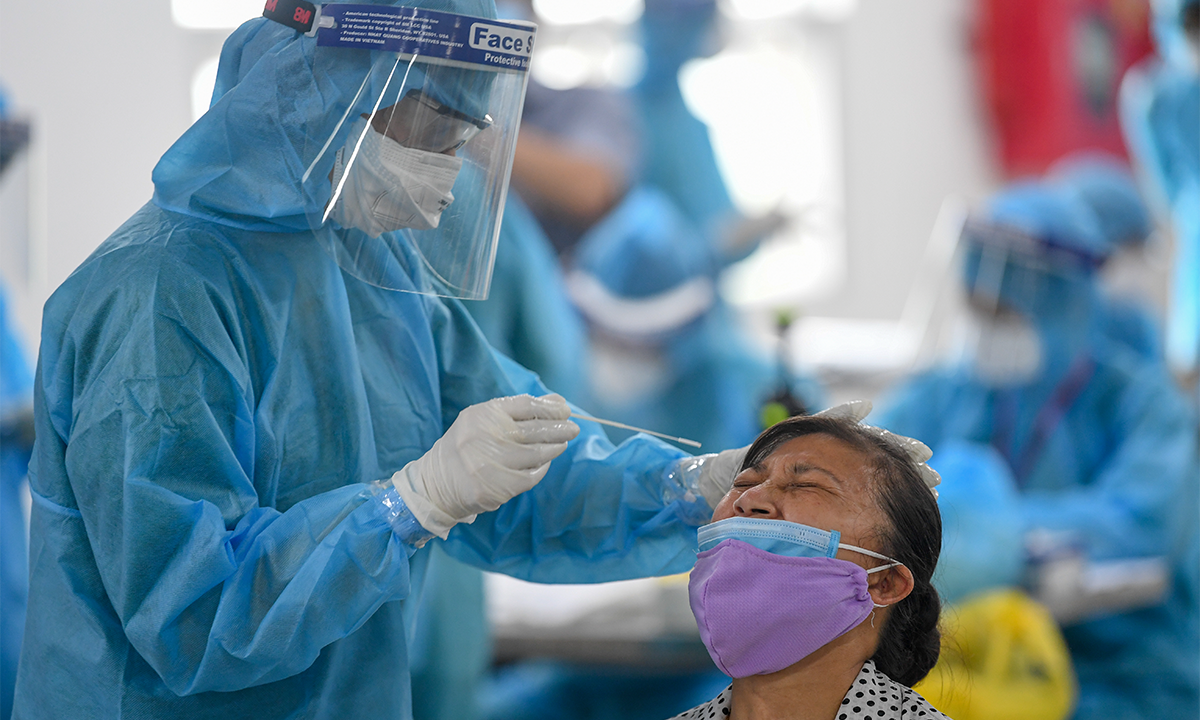 A medical staff take samples of a worker at Quang Chau Industrial Park in the northern province of Bac Giang. Photo by VnExpress/Giang Huy.

Authorities are scrambling to contain Covid-19 outbreaks in industrial parks to ensure the operations of manufacturing giants like Samsung, Canon and Foxconn are not affected.

The industrial parks that have been shutdown also house production facilities of Taiwanese giant Foxconn, an Apple supplier.

Bac Giang Chairman Le Anh Duong said shutting down the parks was a difficult decision but necessary to increase safety in the province and beyond.

Since these parks host many global manufacturers with 240,000 employees from 57 cities and provinces, Bac Giang only made the decision to shut them down after the province registered 411 Covid-19 cases, including 326 in industrial parks. The decision aimed to limit the spread the virus as workers return to their respective hometowns.

140,000 workers have tested for the novel coronavirus. Provincial authorities plan to test a total of 300,000 samples.

The province has prepared 900 beds in five hospitals, bracing itself for more cases. The figure can go up to 1,600 beds if needed.

In the neighboring province of Bac Ninh, Covid-19 case have been detected in three industrial parks – Thuan Thanh 2, Que Vo and Yen Phong. Among the infected are workers of Samsung Electronics and Canon.

Authorities have conducted random tests among 28,000 workers of Goertek Vina, an assembler for Apple, which is located in Que Vo.

Deputy Minister of Industry and Trade, Dang Hoang An, has said that preventing Covid-19 contagion in industrial parks, factories, malls and markets have to be accorded top priority.

“These crowded facilities still need to operate to ensure the economy is not disrupted. Therefore the situation will become dire if we fail to prevent Covid-19 spreading in these facilities,” he said.

Ho Chi Minh City, a port city and manufacturing hub, has been conducting random tests on 16,800 workers at export processing zones and industrial parks, and plans to test 20 percent of the 280,000 workers there.

The city has issued the highest risk warning of Covid-19 contagion in manufacturing zones and industrial parks. It has 17 such facilities with 1,500 companies.

The northern localities of Hai Phong, Hung Yen and Vinh Phuc and the central localities of Da Nang and Phu Yen have all called for strict imposition of safety measures at industrial parks and factories.

Some major companies have also initiated strict measures to ensure safe operations during the ongoing outbreak.

Starting May 10, Vietnam Electricity (EVN) has confined some of its employees within its premises to avoid contact with outsiders.

The Binh Son Refining and Petrochemical Jsc (BSR) got 138 employees tested before sending them to the Dung Quat Oil Refinery in Quang Ngai Province.

It has also set up facilities for 200 staff to stay near the refinery in case of emergencies, with enough food stored for 30 days.

The spurt in community transmissions under the new wave that struck April 27 is led currently by the northern province of Bac Giang (683 cases), followed by neighboring Bac Ninh (378). In both provinces, most of the cases have been detected in factories.