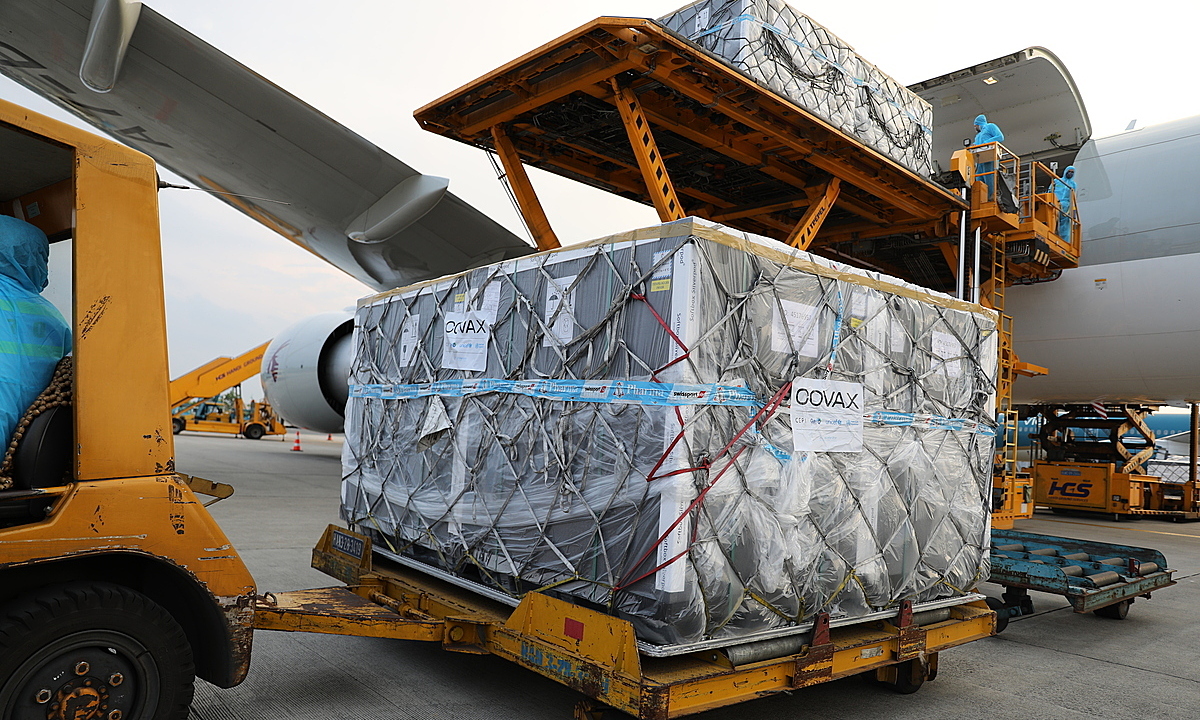 A container of the AstraZeneca Covid-19 vaccine distributed

via Covax facility arrive at Noi Bai Airport in Hanoi,

The second batch of nearly 1.7 million doses of the AstraZeneca vaccine under the Covax facility reached Hanoi Sunday.

The doses were transferred to the National Institute of Hygiene and Epidemiology (NIHE) for storage, awaiting the Health Ministry’s instructions on distribution to localities for the third phase of vaccination.

Duong Thi Hong, deputy director of the NIHE, said the vaccine boxes have been transported in the prescribed temperature. The shipment is part of the 4.1 million doses committed in free support for Vietnam under the Covax facility.

The health ministry has said that the second batch will be used to expand vaccination coverage to more people in priority groups, and provide a second dose to those who have already got the first dose.

Vietnam began its inoculation program in March using the vaccine produced by British-Swedish firm AstraZeneca, secured either through contracts or under Covax.

In February, Vietnam received about 117,000 AstraZeneca vaccine doses of the 30 million it has ordered from the producer. A month later, the country received its first batch of the same vaccine under the Covax facility.

So far, over 977,000 people, or about 1 percent of the country’s population, have been vaccinated against Covid-19, mainly frontline workers in the Covid-19 fight and medics at local hospitals. Of these, more than 22,000 have received the prescribed two injections.

Earlier this month, Health Minister Nguyen Thanh Long had said that a review of over 600,000 people who’d been vaccinated showed 16 percent had normal reactions after vaccination, which disappeared over the next 24 hours.

On May 7, Vietnam recorded its first death following Covid-19 vaccination: a 35-year-old female medic at a hospital in An Giang who died due to “anaphylaxis induced by a non-steroidal anti-inflammatory drug allergy,” according to a professional council of the southern province’s health department.

The ministry said around 110 million doses will be supplied for Vietnam this year – 38.9 million under Covax, 30 million from AstraZeneca and 31 million from Pfizer/BioNTech. It has also registered to buy about 10 million additional doses through Covax under a cost-sharing scheme with lower prices.

The nation has been grappling with its latest Covid-19 outbreak since April 27, under which 1,140 community transmissions have been confirmed as of Sunday night.